Metung’s new eatery shaking it up 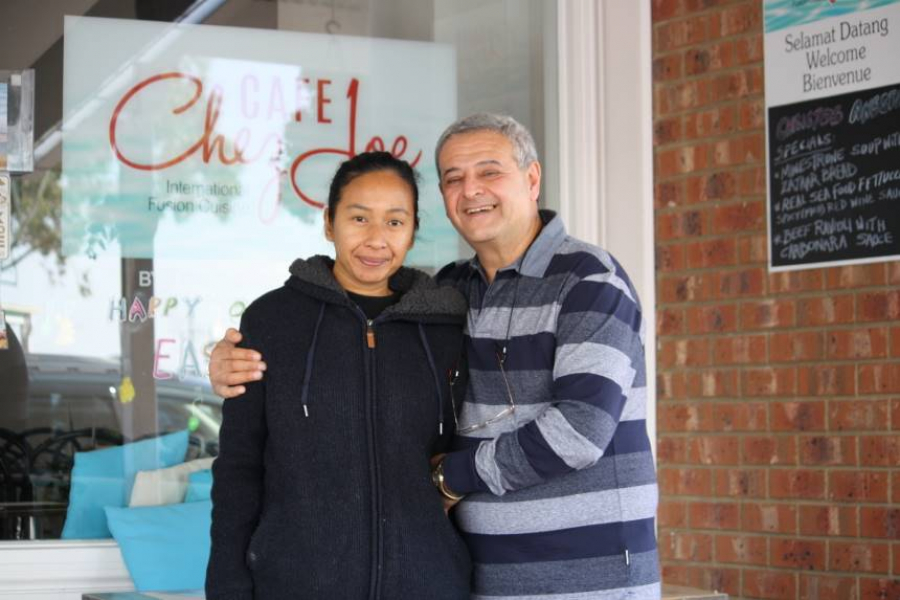 Recently opened Metung café Chez Joe is set to shake-up the café scene in the popular village.
Chez Joe’s kitchen is being overseen by Indonesian native, Kay, who along with her Egyptian born partner, Joe Boutros, has designed a menu sure to tantalize the taste buds and appeal to locals and tourists alike.
The couple is new to running a café-come-restaurant but their passion and determination to make their new business venture a success was obvious when the Advertiser caught up with them at Chez Joe last week.
“We’re offering something that people want,” Joe said, explaining the menu was devised to offer the diner a taste of both cultures -Indonesian and Egyptian.
While Joe’s background is in the oil and gas industry in a diverse range of management roles, Kay has always loved cooking and since arriving in Melbourne from the Indonesian island of Batam, in 2015, has found employment in eateries in South Yarra.
Prior to COVID, Kay had been employed with a large catering company which was to have been involved in hosting Melbourne’s Grand Prix, but with its cancellation and Melbourne eventually going into lockdown, her world shriveled and Kay found herself stuck at home.
When lockdown restrictions eased the couple was eager to get out of their South Yarra home.
In February Joe found himself working in Sale with the gas industry and decided to “do something special” with Kay on a weekend late in February.
Joe noticed an advertisement from Metung’s Farmer and the Cook spruiking their platters and so decided to drive to East Gippsland to “pick one up”.
The couple arrived in Metung on a Sunday and enjoyed the platter and a bottle of French champagne on the Village Green overlooking Lake King.
Later in the afternoon they noticed the “For Lease” sign on the door of what was formerly Bancroft Bites and Joe suggested to a surprised Kay “why don’t you open your own restaurant?”.
Not one to waste an opportunity, Joe phoned the landlord’s number and agreed on a deal that afternoon.
The couple then negotiated to rent an Airbnb cottage for four months on a 350-acre farm off the Metung Road.
Returning to Melbourne, they packed up their belongings and returned two weeks later to open Chez Joe on March 5 in the lead-up to the long weekend.
“We had a soft opening on the footpath serving koftas and falafel before opening that night for dinner,” Joe said.
The couple was surprised by the reaction to their new eatery.
“We thought a soft opening over the long weekend might capture a few tourists, but actually it was the locals who were here, desperate for something different.
“We were ran off our feet,” Joe recalled. Kay remembers it well.
“The first night it was really, really busy,” she said in horror at the memory.
“It was busy inside and outside and I felt a bit overwhelmed.
“All the orders came together, there were all these white bits of paper with the orders lined up (that Joe had dutifully put in front of her) and I went out the back crying,” Kay said.
While Kay realises the Metung crowd was just trying to show their support, she hadn’t anticipated it would be so busy on the first night.
There was more to come. The following Saturday and Sunday nights were just as hectic as word spread through the village that a new eatery had opened.
“Our neighbour, Stuart (from The Local Metung pizza restaurant) he gave me support and teach me,” Kay said.
“He always comes in to check on me.”
Joe also had some advice for Kay.
“I’ve trained some cadet engineers on how to manage time, so I gave her a few pointers,” he said.
“Kay was more in control on the second night. She’s Batak (Sumatran tribe) so she’s the boss,” he said.
Kay told the Advertiser she is now feeling better about running the café but is looking for more staff, particularly those with experience in cooking food from her homeland.
Secretly she’d love to have another Indonesian working in the kitchen in order to give her moral support and boost her confidence.
Everything served at Chez Joe is handmade. Seafood fettucine has been a popular choice as has the beef rendang and the lamb yellow curry with jasmine rice and vegetables.
Minestrone soup, vegetarian moussaka with eggplant, Egyptian salad with crunchy bread, gado gado green salad with peanut sauce and a Cleopatra salad bowl with falafel and tabouli salad are just a sample of some of the other dishes on offer.
For dessert, cheesecakes, tiramisu, sticky date pudding and fresh cannoli with either chocolate or vanilla custard are hard to resist.
Chez Joe is open from Wednesday to Sunday with breakfast from 9am and carrying through to lunchtime which finishes at 2.30pm. Dinner begins at 5.30pm until 8.30pm. BYO alcohol only. Soft drinks and mineral water available. Corkage applies.
Bookings are recommended.
Be nice to Kay.